Projecting Knowledge – The Magic Lantern as a Tool for Mediated Science Communication in the Netherlands, 1880-1940 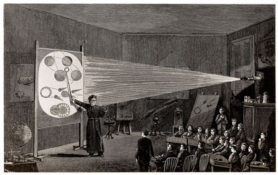 “Projecting Knowledge” studies the use of the magic lantern in science communication in the Netherlands, 1880-1940, and thereby elucidates the role of this important visual medium in the transmission and dissemination of knowledge. Adding “showing” to “telling”, the lantern allowed to share visual information with an entire auditorium and to present scientific information in challenging ways never seen before. It transformed both teaching and public lecturing comparable to the changes brought about by computer programmes such as PowerPoint. Three sub-projects analyse, respectively, the scope of public illustrated lectures aimed at the general audience, the didactic use of projected images in academic teaching, and the background of individual lecturers and scientists who were active in the field of public engagement with the help of the lantern. A synthesis will provide a comprehensive history of the lantern’s role in science communication and dissemination from 1880, when the lantern became a mass medium, to the outbreak of the Second World War. The goal of the project is to analyse the didactic affordances of the lantern, the science communication strategies that it made possible, and the public image of science that resulted from this.

The research program “Projecting Knowledge – The Magic Lantern as a Tool for Mediated Science Communication in the Netherlands, 1880-1940” with project number VC.GW17.079 / 6214, is financed by the Dutch Research Council (NWO). 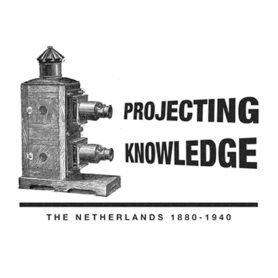